Coming to Tokyo, one of the most glaring differences I immediately noticed was the fact that I didn’t see homeless people. Anywhere. I was confused, and tentatively hopeful. Were the social networks in Japan so tight-knit that there simply weren’t any homeless people? Is this what a society without drugs or war, and with universal health care, look like? Or…oh no! Could their absence be explained by the high suicide rate? (In other words, did people on the way to homelessness simply kill themselves rather than risk shaming themselves or their families?)

Over the years, and as I have come to explore more of Tokyo’s nooks and crannies, I have learned that there are, indeed, unhoused people here: as in many American cities, under bridges and in train station corridors are two places that they can be seen (although, unlike American cities, you could count the numbers of people in those places on your hands). So, their numbers are still vastly reduced: I would not be at all surprised if I heard that my city of 160,000 people had more unhoused people than this metropolis of 39 million. (Anyone know those numbers? On looking it up, I found several sources discussing a recent government survey staying that Japan has 5,000 homeless people…total. In the entire country. However, there are some who question these statistics, as it defines homelessness very narrowly, and the counting techniques were perhaps cursory.) 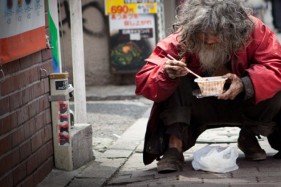 Since there is an entire web series dedicated to this topic — which, by the way, I highly recommend — I will not go too far into providing stats or speculation, but will simply give a couple of key points and personal anecdotes that you may find interesting.

So, a couple of key points:

So, that said: I want to talk about a story my students told me recently, and one that Tomo told me yesterday.

First off, a few weeks ago my Social Justice students were telling me about all the different types of social service projects they were involved in. It turns out that one that is very popular amongst them is making onigiri (rice balls) for the homeless, which they hand out at a local church on Sundays. (Remember, I teach at a Catholic school.) When I asked them how this experience was for them, they talked about the fact that, having grown up in Japan, they had no idea that there was homelessness here at all, much less the scope of it. I asked them how many people came to eat their rice balls each weekend, and they said, “So many! The line reaches around the building and down the street, Ms. Liliana.” “Like how many, would you estimate?” “Hundreds, Ms. Liliana,” they said, eyes wide. They all agreed that they were shocked by this, and that the men — they are all men, they said — were very humble and grateful to them for the food they are providing. Still, they have little interaction with them beyond that, and I am left wondering who these men are, and what are their stories.

Secondly, Tomo’s experience yesterday. Tomo was in a park in our neighborhood taking a break from his Sunday afternoon solo jogging date to do some dogwatching, when he came upon a man stretched out on the grass, apparently sunbathing. After a couple of minutes of sitting nearby the man, he approached Tomo and asked him if he might be able to “donate” some money to him. Not wanting to give him cash, Tomo told him he did not have any change, then went to buy him a hot beef onigiri at a park kiosk. The man was visibly surprised that Tomo had done that for him, and very gratefully thanked him. Tomo explained to him that he had experienced a similar situation himself once upon a time; that he was thankful to those who helped him at that time, and that he now found himself in a situation in which he could help others. The man was moved by this, and said he hoped one day he would be able to reciprocate.

Tomo was shocked and saddened by this exchange, as it was the first time in all of his life in Japan that he was approached by someone hungry, asking for money. He was also sad in thinking about the fact that most people that he knew of here would be likely to refuse to help, and would indeed shy away from being spoken to by a homeless person (as is the case with many people in the Americas, of course). He said that he realized that his experience working and living closely with unhoused people in Eugene made him more comfortable talking to the man than many others might be.

Once again, we are reminded of the incredibly fortunate life we lead, and wonder how we could be of greater service to the world.

So that’s all for now on that topic. Tomo and I have decided that we want to do some volunteering to help the unhoused here. I will let you know how that goes.

Want to know more? Check out this series (here’s Part 1) :

“Homeless in Tokyo: Fallen through society’s cracks and frozen out” (12/24/2017) https://www.japantimes.co.jp/community/2017/12/24/issues/homeless-tokyo-fallen-societys-cracks-frozen/#.W8RwoBMzaRs